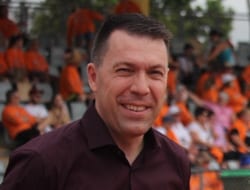 Cr George Brticevic, Mayor of Campbelltown is the Patron of the 24 Hr Fight Against Cancer Macarthur.

The Mayor is a strong advocate for the organisation and very proud of the efforts of the Macarthur community and the benefits that the money raised makes to the treatment and care of local children and adults with cancer.

We thank Cr Brticevic for his valued and ongoing support. 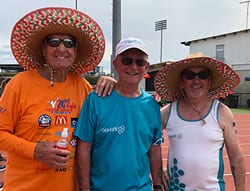 Christopher Hill spoke as a long term patient and user of the Macarthur Cancer Therapy Centre services. He spoke emotionally about the depth of support he had received  over many years .and of the wonderful medical care and attention he had received from staff and allied professionals.

He highlighted the services and equipment that 24Hr Fight Against Cancer had supplied which had made his treatment and recovery that much easier. He thanked sponsors and the Macarthur community for the support they had shown to him and thousands of other local people dealing with cancer.

Christopher’s optimism and strength in the face of significant health challenges touched many in the crowd. He has been a long term supporter of 24Hr as part of the Aquafit team and is also well known on the track as one of the ‘three Gymingos’ (centre in photograph)

As part of the Opening Ceremony, Christopher was also invited to unveil the plaque erected in memory of Fred Borg, Founder. 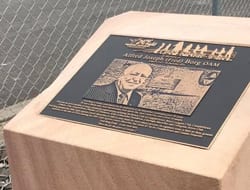 With the sudden passing of our Founder and Chairman, Clr Fred Borg OAM in December 2016, the Committee felt it very  fitting that we acknowledge Fred at the 2017 Opening as our Special Guest. His much loved fishing hat occupied his seat as a poignant reminder of the man we all loved and admired.

A testimonial was written and read by Sue McGarrity, Deputy Chairperson to acknowledge the tremendous contribution that Fred Borg had made to our community, and especially the 24 Hr Fight Against Cancer Macarthur. Read the full text here. Professor Vincent Ho, Gastroenterologist at Campbelltown Hospital spoke about state-of-the-art medical equipment generously provided by 24 Hour Fight Against Cancer Macarthur for the diagnosis and treatment of gastrointestinal cancers. He explained that with these new medical tools, less invasive investigations and treatments could be performed on patients, greatly reducing their stress, both physically and mentally.

Professor Ho thanked the Macarthur community and sponsors for the provision of this very specialised equipment and advised that without the support of 24 Hr Fight Against Cancer these machines would not be available to public patients in Macarthur. 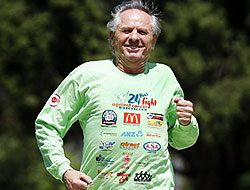 He’s been supporting the 24 Hour Fight Against Cancer Macarthur with his family for years. But never has this popular member of the local community been so involved. This year Arthur Panoutsopoulis, proprietor of Charcoal Chicken, stood before a packed stadium and emotionally shared his own battle with pancreatic cancer. Ken & Liz Stonestreet are both survivors having battled breast & bowel cancer between them. They have been strong supporters of the 24HFACM and committee members. ‘‘I’ve been with 24-Hour for quite a few years and it’s great to see the support the Macarthur community gives,’’ Ken said.‘‘I’m very proud, it means everything to us; we don’t have to go into Sydney for treatment, there’s a patient care bus, probes—it’s a needed thing and everyone donates to it. I’m so proud that all the money raised stays in Macarthur.” 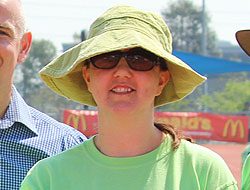 The 2013 event was opened by Samantha McGarrity of Rosemeadow, whose daughter Niamh, 4, died in January after a battle with brain cancer. As the captain of Team Green, she touched the crowd with her story of Niamh’s fight. Marie Ashton was invited to open the 24 Hour Fight Against Cancer Macarthur in 2012 in recognition of her extraordinary support to women with breast cancer in Macarthur while she was undergoing extensive treatment for the disease herself. Marie was a co-founder of the Youngies group, an informal coffee club where women of all ages with breast cancer could come together to share experiences, laugh and enjoy each other’s company. Marie’s aim was to help others find the joy in life even during the difficult times and she certainly led by example. Marie’s beautiful nature, her dedication to her family and her untiring commitment to helping others was inspirational. Marie passed away in February 2013 but her legacy lives on in the memory of those who knew her and the ongoing coffee meetings, dinners, outings and mutual support that the Youngies still provide to each other. Dorothy is a breast cancer survivor and local charity worker who has been a long standing supporter of the 24Hour Fight Against Cancer as well as volunteer at the Macarthur Cancer Therapy Centre and member of the Macarthur Cancer Support Group. Dorothy opened the 2011 with her Granddaughter and the Premier of NSW, the Hon Barry O’Farrell. 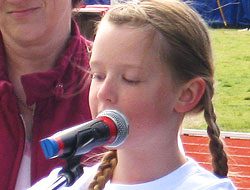 Nine-year-old Gracie’s involvement in the Fight Against Cancer came after she read out a lettershe had written when wheelchair athlete Paul Nunnari visited her Menangle Park school as part of his annual fund-raising promotion for the 24 Hour event. Her father was battling bowel cancer at the time and most of her school friends didn’t even know. Gracie’s inspirational message and effort of support for the Fight was an inspiration to the committee and many others. Amy, Charlotte and Allison Carr opened the 5th Annual 24 Hour Fight Against Cancer Macarthur in October 2009. Sadly, the three sisters lost both their dad (David) and mum (Heather) to cancer within a few short years. They spoke eloquently of the quality medical care and loving attention provided to their family by the staff at the Macarthur Cancer Therapy Centre and the Palliative Care Unit at Camden Hospital. These truly inspirational young ladies have been involved for a number of years in fundraising for the 24 Hour Fight Against Cancer Macarthur and expressed their commitment to continue, as a way of saying thank you for the support their family received in the past. 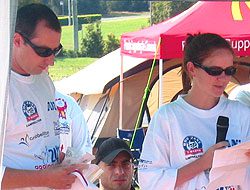 Nicole and Daniel Ragusi opened the 4th Annual 24 Hour Fight Against Cancer Macarthur in October 2008. Their two year old son was receiving treatment for cancer at the Paediatric Ambulatory Care Unit at Campbelltown Hospital and the Sydney Children’s Hospital at Randwick. They expressed their appreciation that funds provided by the 24 Hour Fight Against Cancer Macarthur provided training for local paediatric cancer care nurses which meant that Max could now have more of his treatment and follow up visits at Campbelltown Hospital, greatly reducing the burden on their family. We were all saddened to hear that little Max passed away from his illness in July 2010 aged 3 years. We extend our sincere sympathy to Nicole, Daniel, Sam and Max’s extended family and hold them close in our thoughts and hearts. Paul Nunnari needs no introduction to the Macarthur community being a very well known Silver Medal Paralympian. Paul opened the 3rd Annual 24 Hour Fight Against Cancer Macarthur in October 2007. Paul shared with the community that his father had recently passed away with cancer and spoke movingly of the strength and dignity that his father displayed during his illness. Paul is fulfilling his father’s wish that he support fundraising efforts which assist local people with cancer. 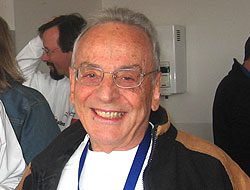 Many Macarthur residents know John List from his days as a high school principal and his community interests. John opened the 2nd Annual 24 Hour Fight Against Cancer Macarthur in October 2006. John is a cancer survivor. He highlighted for all present the need for a fighting spirit and a positive attitude to help you through the challenges and emotional highs and lows that you experience as a cancer patient. 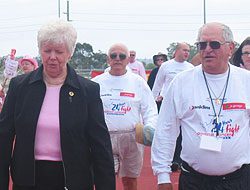 Bev Moroney, wife of the then NSW Police Commissioner opened the Inaugural 24 Hour Fight Against Cancer Macarthur in October 2005. Bev lives in Campbelltown and is a cancer survivor. During her opening address she spoke about the strength she drew from having the support of friends, family and people in her local community during her treatment and beyond.

Register to join us in supporting a great cause, and the local community. You can sign up now and join a team to take part.